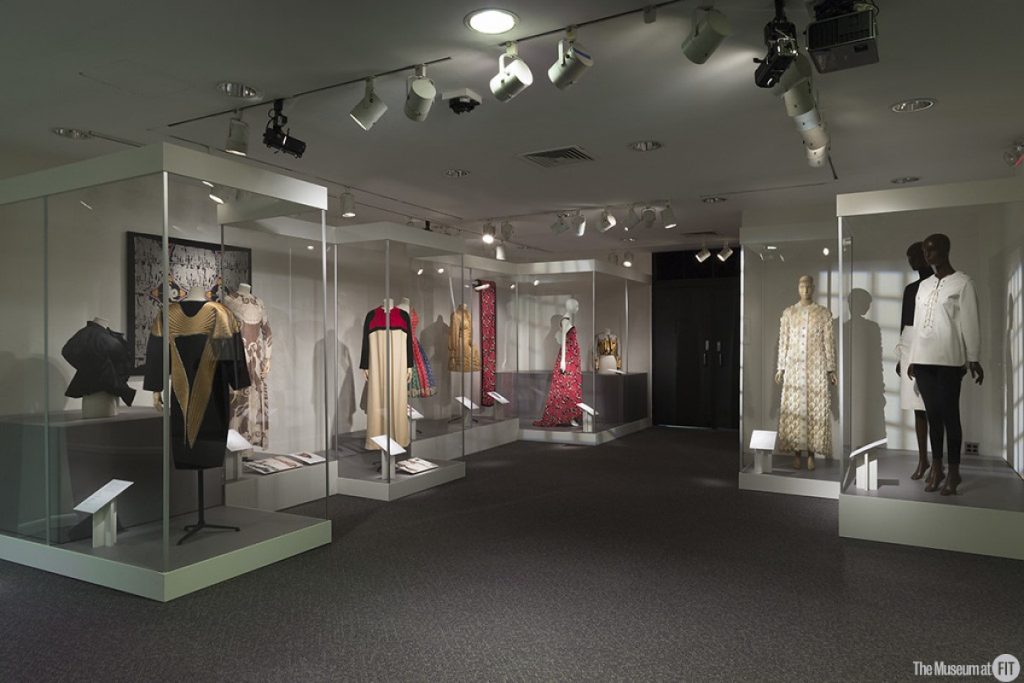 The Traphagen School of Fashion played an important role in the development of American fashion. Largely forgotten today, the school opened in 1923 in New York City and trained over 28,000 students. Alumni included Geoffrey Beene, James Galanos, and Anne Klein, all of whom utilized the training they received there throughout their careers. “The Traphagen School: Fostering American Fashion” celebrated the school’s lasting influence on the fashion industry by examining the history of the school and its design philosophies — which included design-by-adaptation and experimentation — as well as its innovative approach to marketing.

Ethel Traphagen, the school’s founder, was one of the first teachers of fashion design and illustration in New York City. She also worked in the fashion industry as a writer and illustrator. After winning first prize for her design of an evening dress in a 1913 contest, Traphagen was hired by the Ladies’ Home Journal as a contributor. This contest was the first of many promoted by the American design movement, which sought to encourage original American designs that were free from Parisian influence.

When Ethel Traphagen established her school, she built on the foundational concepts of the American design movement. Design-by-adaptation was its core philosophy. This approach to fashion design took details such as colors, motifs, and construction elements from fine art, diverse cultural artifacts, and historical objects, then abstracted them to align with the preferences and lifestyles of American consumers.

The Traphagen School was known for its study collection of artifacts, as well as its library, which housed a large collection of books and historic fashion plates available to students to use as sources of inspiration. A 1929-1930 “Zanbaraza” dress made by students at the school features a textile design with a shield motif that was inspired by items Traphagen collected on a 1928 trip to Nairobi, Kenya. Forty years later, James Galanos incorporated historical motifs from ancient Greek pottery into the textiles for his spring/summer 1970 collection, a testament to the lasting influence of design-by-adaptation.

The Traphagen School also encouraged experimentation. Students routinely worked with new materials and explored different construction techniques. A 1939 collection of bathing suits and beach accessories made from a new water-resistant fabric called Koroseal is typical of the school’s experimental work. Alumni continued to employ experimental practices throughout their careers. For instance, in 1959 Luis Estévez created an evening gown out of lightweight cotton voile, as opposed to a more conventional evening wear fabric, such as silk satin.

In addition to her design philosophies, Ethel Traphagen modeled marketing for her students, largely through a semi- quarterly magazine called Fashion Digest. The magazine chronicled and promoted the many partnerships between students and industry professionals on design projects and highlighted alumni work. The cover of each issue featured a silhouette of a figure wearing medieval clothing. This logo was also used for The Traphagen School’s other promotional materials, foreshadowing branding strategies that are standard in the industry today. By emulating Traphagen’s methods of self-promotion, many of her students were able to achieve commercial success. For example, Anne Klein also integrated a logo into her marketing campaigns, prompting consumers to associate a lion’s face with the freedom of Klein’s sportswear separates. American women wore Klein’s comfortable ensembles for all occasions, emphasizing the versatility of her garments and her awareness of the needs of modern women.

In 1973, the Battle of Versailles was organized as a fundraiser for the restoration of the French palace. It was marketed as a competition between American ready-to-wear designers and Parisian haute couturiers. The five American designers, which included Klein and Stephen Burrows, presented dynamic and modern fashions that made French couture seem outdated in comparison.

Klein’s participation at the Battle of Versailles underscored the significant influence of educational institutions on the American fashion industry. Burrows was an alumnus of the Fashion Institute of Technology, which was founded in 1945 and continues to educate fashion professionals today. Although The Traphagen School closed its doors in 1991, its legacy lives on at institutions such as FIT.

The Traphagen School: Fostering American Fashion was organized by the graduate students in the Fashion Institute of Technology’s MA program in Fashion and Textile Studies: History, Theory, Museum Practice, with the support of Sarah Byrd, Keren Ben-Horin, Emma McClendon, and Elizabeth Way.