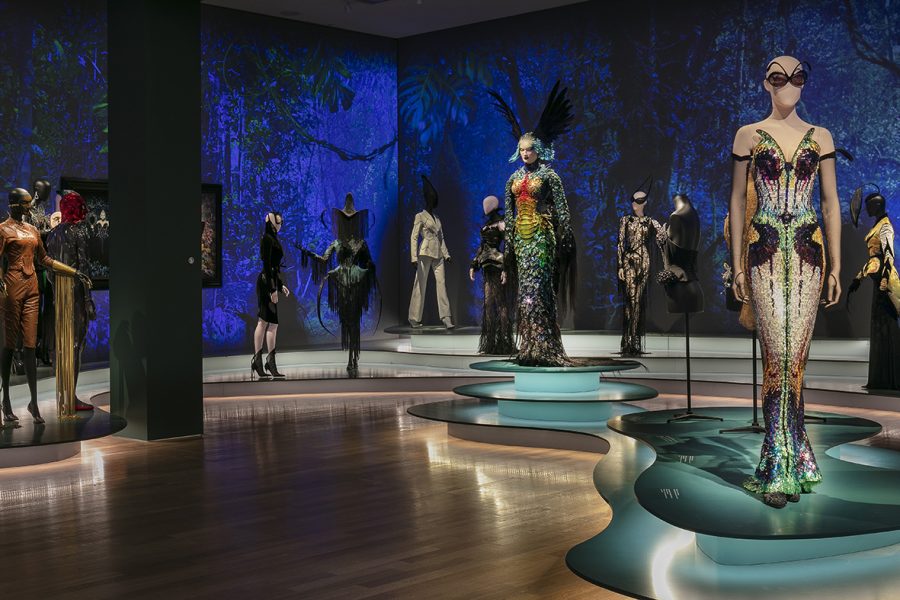 Due to the covid-pandemic, this exhibition was closed for several months.

EXPERIENCE A VIRTUAL WALK THROUGH THE ENTIRE EXHIBITION HERE.

Thierry Mugler: Couturissime presents 150 haute-couture and prêt-à-porter outfits by a visionary couturier, director, photographer, perfumer and dancer – almost none of which have ever been exhibited – in addition to accessories, stage costumes, videos, rarely seen sketches, and archival material. Numerous art prints by leading fashion photographers round out the show.

Mugler was one of the young designers who reestablished fashion in Paris during the 1980s and 1990s, once again making it competitive with New York’s coolness and Milan’s expertise. In 1997, the moribund Chambre syndicale de la haute couture parisienne (the French fashion industry’s governing body) opened its tightly locked doors to welcome a few exceptionally progressive designers, among them Mugler. It was a historic event.

With tendencies toward the futuristic, Mugler experimented with avantgarde techniques and materials – including (acrylic) glass, PVC, faux fur, vinyl, latex and chrome. His broad architectural silhouettes have made their mark on the history of fashion. To this day, Mugler continues to influence an entirely new generation of up-and-coming couturiers.

“My only measure is excess”

Borrowing from the animal kingdom, the world of myth, Hollywood glamour as well as from the universe of modern technology and architecture, he created a superhero look for the strong, modern woman. His fashion is characterized by a sophisticated mixture of high and popular culture, in which refined haute couture meets drag show drama.

Mugler’s creations have been worn by stars like Diana Ross, David Bowie, Lady Gaga, Céline Dion and Beyoncé, and captured on film by masters of fashion photography like Helmut Newton, Ellen von Unwerth and Pierre et Gilles. With his penchant for theatrical performance, Mugler has created some of the most spectacular fashion shows of his time.

This exhibition was initiated and produced by the Montreal Museum of Fine Arts in collaboration with the Maison Mugler which restored the designer’s heritage couture. The exhibition was curated by Thierry-Maxime Loriot.