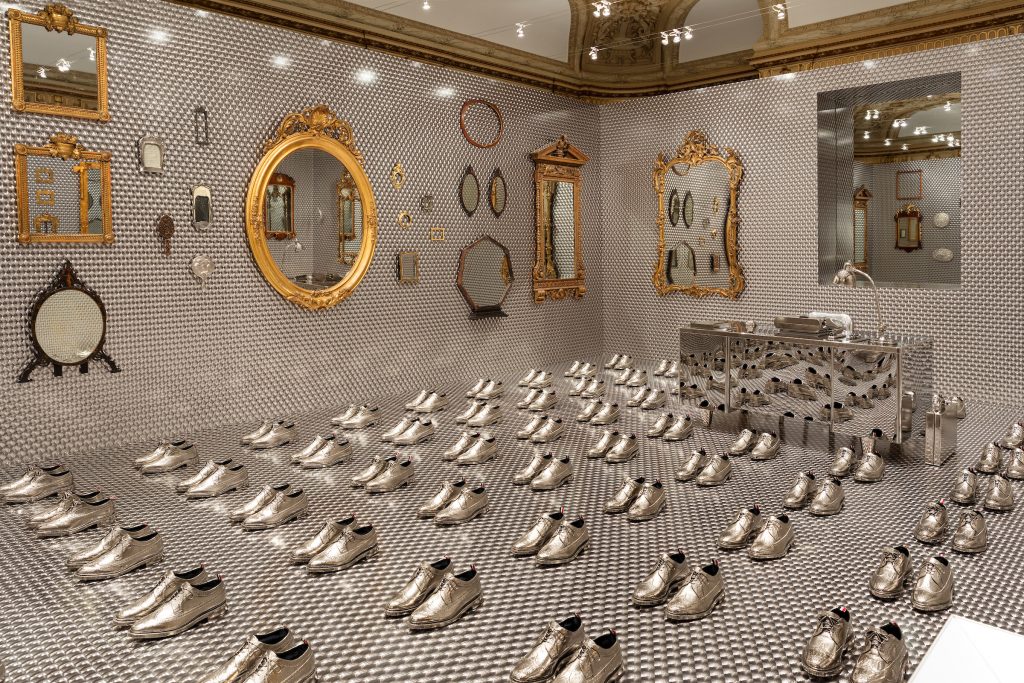 For the next installment of Cooper Hewitt, Smithsonian Design Museum’s popular “Selects” series, fashion designer Thom Browne explores ideas of reflection and individuality with an installation that includes more than 50 of the museum’s historic and contemporary mirrors and frames. “Thom Browne Selects,” on view in the Nancy and Edwin Marks Collection Gallery March 4–Oct. 23, 2016, is the 13th in the ongoing series in which prominent designers, artists and architects are invited to mine and interpret the museum’s collection of more than 210,000 objects.

Known for his meticulous approach to tailoring in men’s and women’s ready-to-wear, Browne re-examines codes of conventional fashion by playing with ideas of uniforms and uniformity while focusing on exceptional materials and craftsmanship. For his “Selects” presentation, Browne celebrates the notion of the individual with an immersive, site-specific installation, featuring a wide variety of mirrors and frames from Cooper Hewitt’s collection that are displayed together with some of Browne’s personal items such as a desk, chair, typewriter and coat stand.

“A National Design Award winner for fashion design in 2012, Thom Browne’s rigorous technique and provocative work have made him one of America’s most celebrated designers and earned him legions of fans,” said Caroline Baumann, director of Cooper Hewitt. “Thom’s engagement with Cooper Hewitt’s extraordinary collection of historic and contemporary mirrors and frames will give new insight into his singular design vision, as well as enhance our understanding of the individual works he selected.”

“When approaching this project and exhibition, I was drawn to the collection of mirrors and wanted to create an installation that played on the idea of reflection—giving the viewer the idea that his or her reflection is a work of art. My intent was also to play with the idea of uniformity and individuality,” Browne said.

The works on view include 18th-century French gilt bronze frames, brass and fruitwood frames by Hector Guimard and mirrors by designers such as Edgar Brandt, Carel Adolph Lion Cachet, Jim Dine and Tommi Parzinger. In a further play on the exhibition’s theme, 56 pairs of Browne’s reflective nickel-plated shoes will be displayed among other gallery objects. Covering the walls and floor will be a laser-engraved, holographic reflective wallpaper by Osborne & Little, recently acquired by Cooper Hewitt.

“Thom Browne Selects” is made possible by the Marks Family Foundation Endowment Fund.

ABOUT THOM BROWNE
Thom Browne was named the CFDA Menswear Designer of the Year Award in 2006 and 2013, the GQ Designer of the Year in 2008 and the Cooper Hewitt National Design Award winner in fashion design in 2012. He began his business with five suits and with a small by-appointment-only shop in 2001 and introduced his ready-to-wear collection in 2003. His collections have been recognized by museums around the world, including the Costume Institute at the Metropolitan Museum in New York, the Victoria and Albert Museum in London, and the Fashion Museum in Bath, England.

ABOUT COOPER HEWITT, SMITHSONIAN DESIGN MUSEUM
Founded in 1897, Cooper Hewitt is the only museum in the United States devoted exclusively to historic and contemporary design. On Dec. 12, 2014, Cooper Hewitt opened in the renovated and restored Carnegie Mansion, which offers 60 percent more exhibition space to showcase one of the most diverse and comprehensive collections of design works in existence. The renovation of the Carnegie Mansion and museum campus was recognized in 2015 with LEED Silver certification. Currently on view are 10 exhibitions and installations featuring more than 650 objects throughout four floors of the mansion, many of which draw from the museum’s permanent collection of more than 210,000 objects that span 30 centuries. For the first time in the museum’s history, the entire second floor is dedicated to showcasing the permanent collection through a variety of exhibitions. Visitors can experience a full range of new interactive capabilities, including the opportunity to explore the collection digitally on ultra-high-definition touch-screen tables, draw their own designs in the Immersion Room and address design problems in the Process Lab.