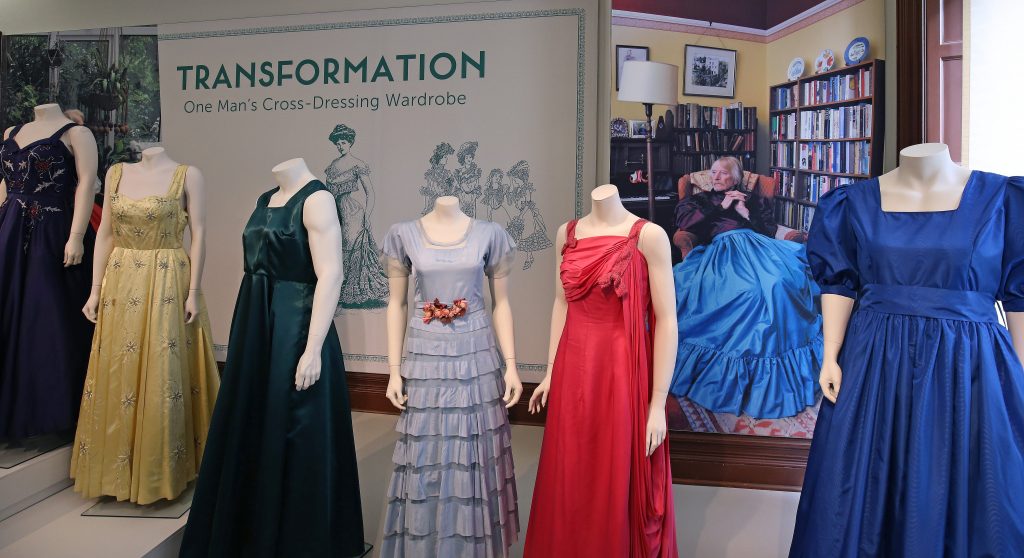 The Walker Art Gallery is to exhibit garments from Liverpool costume collector Peter Farrer’s cross-dressing wardrobe in the first display of its kind to be held in the UK.

Transformation: One Man’s Cross-dressing Wardrobe opens on Saturday 24 October in the Walker’s Craft and Design Gallery and runs until February 2017. The display, which forms part of Liverpool’s Homotopia Festival 2015, is the UK’s first to showcase a cross-dressing wardrobe belonging to one person.

Born in Surrey in 1926, Peter Farrer has lived in Liverpool for many years. He has been married twice and has a son. Peter’s fascination with women’s clothing started at an early age and he began cross-dressing from the age of 14.

“Peter’s vast costume collection contains some truly wonderful pieces. His life-long passion for taffeta is reflected in a fabulous range of evening dresses from the 1930s to the 1980s. We’re thrilled to be able to showcase a selection of these outfits here at the Gallery.

“In many ways, Peter’s motivation for collecting vintage clothing was two-fold. While he took enjoyment from wearing the larger garments in private, he also held a great appreciation for the design, fabrics and decoration of the pieces.”

Peter’s father was a schoolmaster and clergyman and the family lived in a number of different locations while Peter was growing up. After leaving school, Peter served in the Army for three years before studying at the University of Oxford. Upon graduating, he joined the Civil Service as a tax inspector, a job he held throughout his working life.

“Dressing in a taffeta frock did not make me want to be a girl, but it certainly made me understand how much pleasure girls and women get from their party frocks, and intensified my interest in fashion and in the history of costume.”

During the early years of his collecting, Peter ordered women’s clothing and underwear by mail order. He also shopped in department stores, where he felt no pressure to explain that the garments were for him.

In 2000, Peter began to purchase taffeta dresses, skirts and blouses from the Brighton-based clothing company, Kentucky Woman. Founded by Sandi Hall in 1990, the company specialised in making bespoke garments in period styles, often for members of the transgender and cross-dressing communities.

“I started getting discreet enquiries from male clients for made-to-measure dresses, frocks, skirts, period costumes and even ball gowns. I had a small private studio, which was invaluable as I could see these clients on a confidential basis. This was a period in time when transgender people lacked the freedom they enjoy today.”

Peter was one of Sandi’s early customers and she helped to create dresses for him that were made in his size and to his particular taste. He selected the colours and fabrics and collaborated with Sandi on the designs. Many of these garments feature in the display.