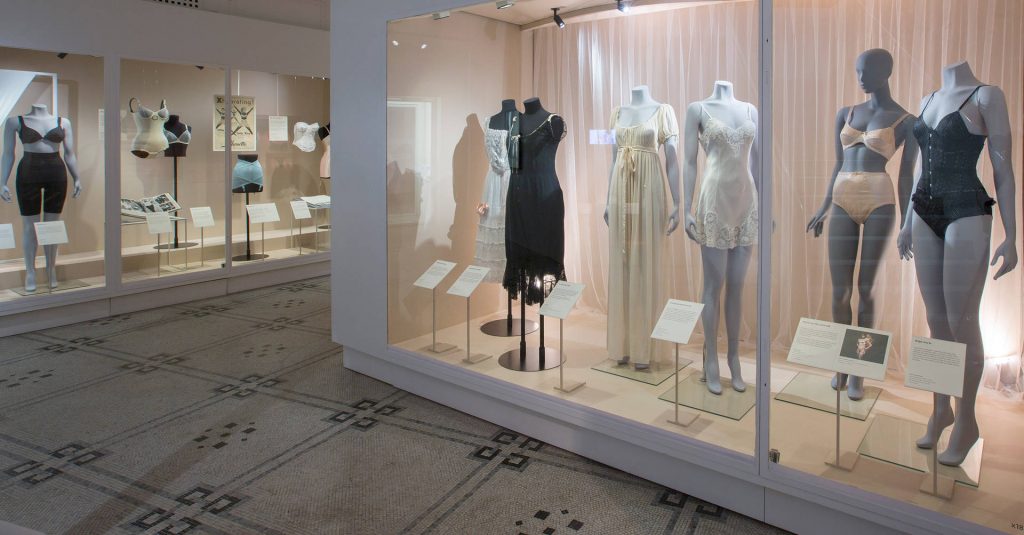 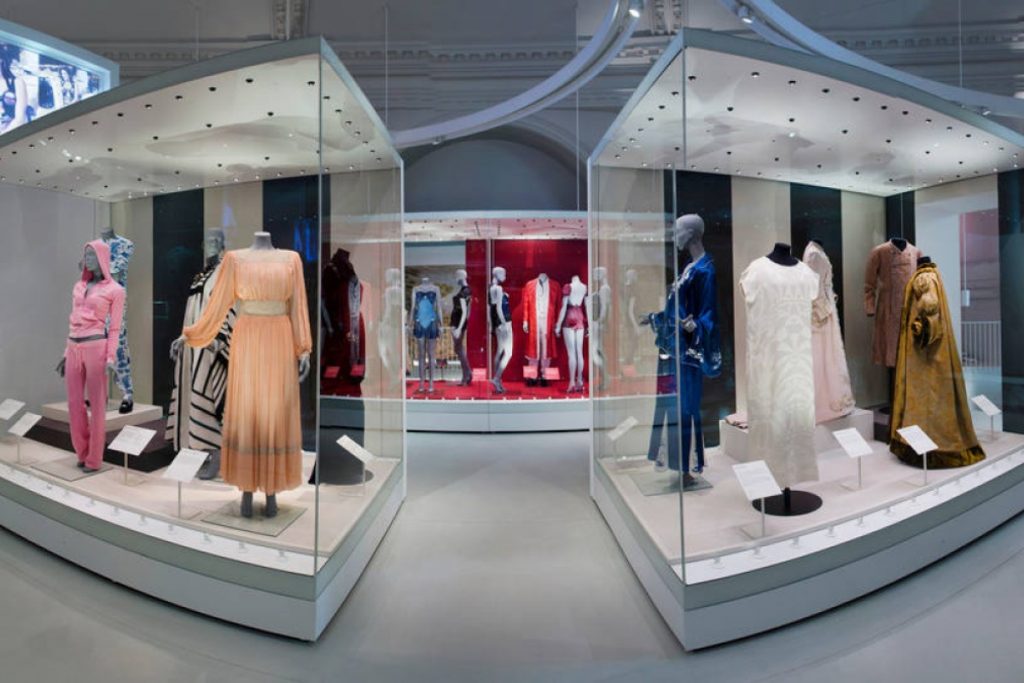 Next year the V&A will tell the story of underwear design from the 18th century to the present day, considering the practical and personal, sensory and fashionable and exploring underwear’s roles of protecting and enhancing the body. Undressed: A Brief History of Underwear will display more than 200 examples of underwear for men and women, highlighting the enduring themes of innovation and luxury, from the custom-made, such as a rare example of home-made ‘stays’ worn by a working woman in England in the 18th century to pieces by designers including Stella McCartney, La Perla, Rigby & Peller and Paul Smith.

The exhibition will explore the relationship between underwear and fashion, notions of the ideal body, and the ways that cut, fit, fabric and decoration can reveal issues of gender, sex and morality. It will consider health and hygiene and address the design and technological advances central to the development of underwear. On display will be corsets, crinolines, boxer shorts, bras,hosiery, lingerie and loungewear alongside contextual fashion plates, photographs, advertisements, display figures and packaging. Highlights will include long cotton drawers worn by Queen Victoria’s mother; an 1842 man’s waist belt used on the wearer’s wedding day; a 1960s Mary Quant body stocking; a pair of gender neutral briefs by Acne; a sheer dress by Liza Bruce famously worn by Kate Moss; and flesh-coloured leggings decorated with a mirrored glass fig leaf by Vivienne Westwood.

Undressed: A Brief History of Underwear will explore the vigorous debate about corsets and how to make them supportive and healthy. A restrictive 1890s whalebone and cotton corset with a waist under 19 inches in circumference will be displayed alongside x-rays and illustrations revealing the dramatic impact on the body of wearing such a garment. Conversely, corsets were also recommended to improve medical conditions and posture. The exhibition will include a lightly boned 1895 version made from aertex, an innovative cellular woven cotton, showing an alternative side to tight lacing. An austerity corset made from paper during World War One and a waist training corset, a slimming tool endorsed by celebrity figures such as Kim Kardashian, will also be on display.

The development of the bra, which enabled movement and mobility, will be traced throughout the 20th century, showing early examples including a lace and satin bust bodice from 1910. Bras, girdles and shapewear will illustrate the importance and variety of support; from striking advertisements for latex corsetry by 1930s brand Chamaux, to a 1950s Playtex rubber girdle and Spanx designs from 2010.

Examples of lingerie, women’s underwear and nightwear made from sensual or luxurious fabrics will be on display. A remarkably detailed pair of 1930s silk chiffon knickers, decorated in lace with a hunting scene, will show how the finest fabrics and exceptional craft skills contribute to making luxury underwear. Garters and hosiery will be shown including floral embroidered stockings worn by Queen Alexandra, wife of King Edward VII, Schiaparelli nylon stockings from 1953 and embroidered stockings exhibited at the Universal Exhibition in Paris in 1900.

The exhibition will explore practical and functional underwear. It will assess the types of fabrics used, from a 1850s cotton chemise, examples of artificial silk from the 1920s and a contemporary set of modal pants for women by cheekfrills, playfully embroidered with the days of the week. The importance of performance will be presented in displays of maternity wear, of underclothes designed to keep the wearer warm or cool, or comfortable and supported during sport. Highlights will include a homemade bust bodice for a nursing mother in the 1820s, a contemporary set of maternity briefs and bra by Hot Milk, a 1970s pair of men’s red string briefs by Brynje of Norway, a ‘Cyclist Corset’ and its box from 1900, and a 1990s sports bra from Marks and Spencer. The importance of fit will be shown in a focus on men’s underwear that includes the packaging for a pair of David Beckham for H&M briefs from 2012, and a display figure for Y-front pants dating from the 1950s. These objects illustrate the way that underwear advertising often plays to the appeal of a youthful, fit, sexually attractive body.

Garments devised to lift, separate or exaggerate parts of the anatomy and to provide a structure for the fashionable shape of the day will be shown. Rare 18th-century hoops will be displayed alongside crinolines and bustles. Some were designed in response to consumer demands for more practical undergarments which did not compromise movement, such as an ingenious collapsing bustle, presented alongside its original advertising materials. The use of underwear to add volume to the body in other contexts will be shown through displays of men’s briefs by aussieBum from 2015, designed to enhance the genitals, and a woman’s push-up bra from the 1990s. A series of coloured humorous stereoscopic images of the hazards of wearing crinolines will also be on Display.

The exhibition will also demonstrate how underclothes and nightclothes morphed into lounge wear; dressing gowns were transformed into informal garments for home entertaining such as tea and hostess gowns. The exhibition will include an 1840s man’s dressing gown, a silk evening dress by Paul Poiret from 1911 which anticipated the chemise dress of the 1920s, a 1970s kaftan for home entertaining, a chic 1930s jump suit by the London fashion house Baroque and embroideredlounge pyjamas from the 1920s. A woman’s pink Juicy Couture tracksuit from 2004 and a man’s T-shirt and pant set by Sibling (s/s 2013) illustrate the continuing desire for comfort at home and a blurring of the line between underwear and outerwear, public and private.

Many designers are fascinated by the relationship between underwear and outerwear, and underwear and the body. Garments on display will show how designers have challenged accepted ideas about private and public, gender, sex and nudity. Underwear is by definition worn beneath other clothes. While shirts, chemises and petticoats were sometimes partially revealed before the 20th century to indicate quality and the wealth of the owner, today social and cultural changes mean exposed underwear is a common sight. The exhibition will include a Calvin Klein crop top and briefs worn with low-slung hot pants, and a beautiful, transparent and an embroidered muslin dress worn with lace knickers, designed by John Galliano for Givenchy haute couture (s/s 1996).

Corsetry and lingerie are often designed to be alluring, seductive or playful, to enable wearers to express their desires and fantasies. Undressed: A Brief History of Underwear will explore the tempting nature of underwear through objects ranging from a vivid pink silk 1890s corset, to 1930s bias cut nightwear, contemporary pieces by Cadolle, Fifi Chachnil and Agent Provocateur, and an exquisite negligée by Carine Gilson, like that worn by actress Bérénice Marlohe in the film Skyfall. All will illustrate that the choice of underwear for the bedroom remains intrinsically personal, and has been throughout the centuries.

Much as underwear can be revealed, it can also be designed with the intention to transform or provoke. Alongside Vivienne Westwood’s ironic flesh-coloured leggings there will a skin-tight laced cocktail dress by Jean Paul Gaultier from 1989, a delicate lingerie dress by Ellie Saab (s/s 2011), a Dolce & Gabbana dress featuring a large cage crinoline (s/s 2013) from their Sicilian Collection, and Antonio Beradi’s monochrome dress (s/s 2009), worn by Gwyneth Paltrow, featuring a trompe l’oeil corset which reveals the underwear worn beneath.