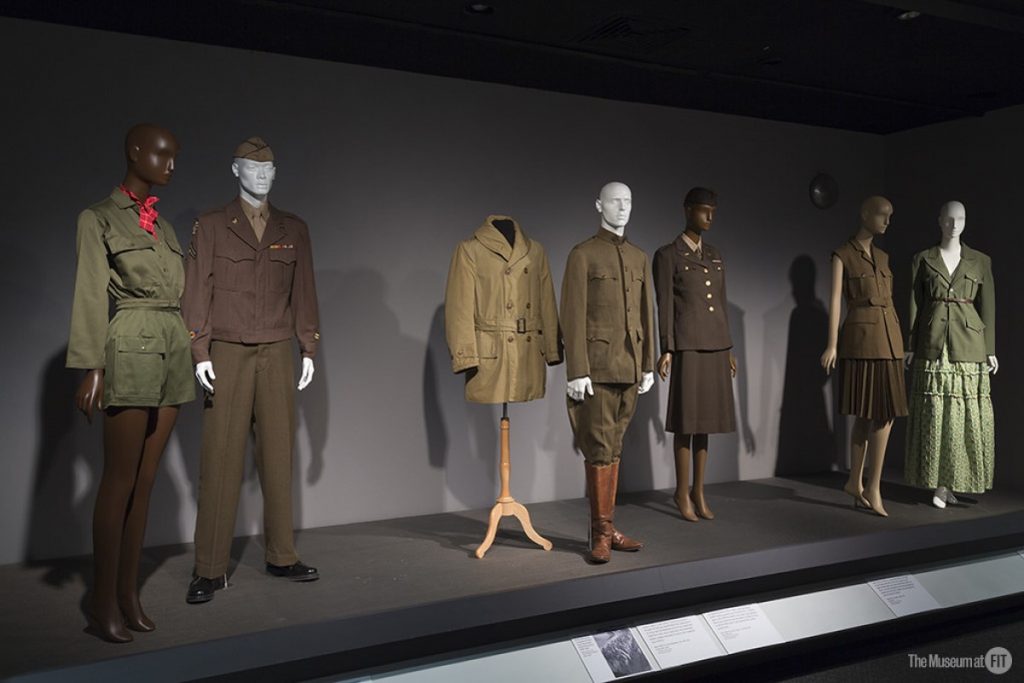 The Museum at FIT presents Uniformity, an exhibition that explores the dynamic history behind a variety of uniforms, examining both their social roles and their influence on high fashion. Uniformity features over 70 objects from the museum’s permanent collection, many of which have never before been on view.

Uniforms occupy a unique place in our society. Designed both to blend in and stand out, they are in a way the antithesis of high fashion. Where uniform design focuses on functionality, control, and tradition, fashion promotes constant change, creativity, and subversion. Yet fashion has often drawn inspiration from uniforms of all kinds, taking functional features and transforming them into decorative elements.

Uniformity is organized thematically to focus on four main categories of uniforms: military, work, school, and sports. The exhibition opens with a display highlighting each of these four themes, including a full Black Watch (Royal Highland Regiment) uniform from 1900, a fireman’s uniform from the 1950s, a contemporary schoolgirl uniform from Japan, and a professional cyclist’s uniform from 1985.

The opening gallery also includes a pair of military formal evening uniform (or “mess dress”) jackets from the early 20th century, resplendent with metallic soutache and black galloon. These features functioned to convey the rank and regiment of the wearer. The use of heavy braided threads derived from a need for protection against blades in hand-to-hand combat during the 18th and 19th centuries. Such adornments have since made their way into high fashion, as seen in a look from Ralph Lauren’s fall 2013 collection.

The exhibition continues its exploration of military uniforms in the first display, which concentrates on the importance of modern “dress” uniforms, considering how they have evolved over time, as well as how they differ among ranks, genders, and the various branches of the armed forces. On view in this section is a U.S. Army colonel Dress Blue uniform from 1950, and a World War II U.S. Naval Reserve WAVES (Women Accepted for Volunteer Emergency Services) uniform designed by the couturier Mainbocher. These are juxtaposed with designs from Chanel, Yves Saint Laurent, and Perry Ellis that demonstrate a range of fashionable uses for the deep blue wool and gold buttons of dress uniforms.

The next section focuses on the U.S. military’s implementation of olive drab service uniforms and cotton fatigues during the 20th century. These are represented by a U.S. Army uniform from World War I, a WAC (Women’s Army Corps) uniform from 1944, a World War II Air Force uniform that features a shortened “Eisenhower” or “Ike” jacket, and a cotton “Jeep” coat, also from World War II. These pieces are shown side-by-side with high fashion garments, such as a design from Comme des Garçons that deconstructs the olive drab service uniform by removing the sleeves while leaving the frayed edges as a form of adornment. A look from Marc Jacobs’s spring 2010 collection features a literal adaptation of an Army field jacket paired with a feminine flowing skirt to create an intriguing juxtaposition.

Naval uniforms in particular have had a marked influence on high fashion ever since the late 19th century, with “middy” collars and “Breton” stripes appearing in sportswear, eveningwear, menswear, children’s wear, and women’s wear. At the center of a platform dedicated to naval garb, two U.S. sailor uniforms from World War I illustrate the adaptability of uniform design to differences in climate and seasonal weather changes. One uniform for warmer weather is made from white cotton, while another version, for cooler temperatures, is rendered in navy blue wool. To either side are pieces that show how designers translate certain details from naval uniforms into high fashion, such as a late-19th century ensemble featuring a sailor or “middy” collar, as well as more contemporary pieces from Jean Paul Gaultier and Sacai that utilize the distinctive “Breton” horizontal stripes of the French navy.

The final military section examines the evolution of camouflage and its impact on high fashion. Camouflage was first developed during World War I by the French, but was in wide use by World War II. Since then, camouflage design has expanded exponentially to include versions for all terrains, climates, and countries. On view in this section is a U.S. Marine camouflage poncho and helmet cover from World War II, as well as high fashion versions of the print from designers such as John Galliano for Christian Dior and Michael Kors.

Also on view in this section are two TWA flight attendant uniforms from 1975, designed by Stan Herman. With their fashionable silhouettes, the two looks show how airlines used uniforms to convey an affluent lifestyle. They also show the way variety can be integrated into design to suggest a level of originality and personal style, even while the uniform remains contained within a fixed visual lexicon.

Another Stan Herman highlight from this section is his design for the original McDonald’s uniform that debuted in 1975. This ensemble demonstrates the growing importance of branding in uniform design during the late 20th century. The work uniforms section concludes with a look from Chanel’s fall 2015 ready-to-wear collection, inspired by the distinctive attire of Parisian waiters.

Also highlighted in this section are the influence of schoolgirl uniforms. Unlike the blazer of their male counterparts, these uniforms feature a drop-waist dress. The earliest example on view is a uniform dress issued to the female students of Marymount College during the 1920s. With a slight “middy” collar and silk tie secured around the neck, the look is a clear nod to the sailor-inspired sportswear of the time. Four decades later, in 1967, Rudi Gernreich created an homage to the style with a flirtatious, mini-dress version of the look, also on view. The Gernreich ensemble highlights the increased sexualization of schoolgirl uniforms during the second half of the 20th century.

Uniformity concludes with a section devoted to athletic uniforms that features historic baseball jerseys, a football uniform from circa 1920, a historic track uniform, a contemporary ski ensemble, and a cycling jersey. The influence of athletic uniforms on high fashion is demonstrated in designs by Ungaro, Geoffrey Beene, Stella Jean, and Gucci, which highlight how the bold insignias and markings of athletic jerseys have influenced the logo-driven branding of many luxury brands.

Uniformity, on view from May 20 through November 19, 2016, is organized by Emma McClendon, assistant curator of costume at The Museum at FIT.