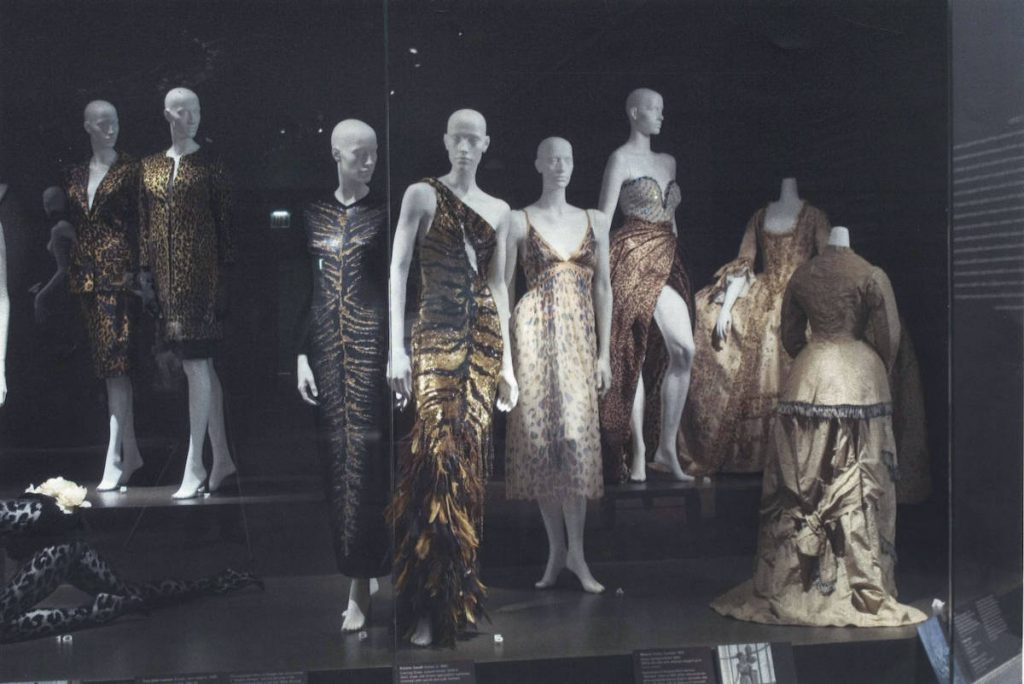 WILD: Fashion Untamed presents a historical and crosscultural examination of man’s obsession with animalism as expressed through clothing. With more than one hundred costumes and accessories on display, the exhibition focuses on the practical, spiritual, psychosexual, and socioeconomic underpinnings of the decorative possibilities of birds and beasts. Whether in the form of pelts, plumes, prints, or animal symbolism, faunal apparel has represented one of man’s more primal instincts.

Organized thematically, the exhibition examines how the physical and sexual characteristics of animals have come to define ideals of femininity. Evoking the power and strength of wild beasts, the notion of “woman as huntress” is explored in the work of fashion designers such as Alexander McQueen and Yohji Yamamoto. Drawing on nineteenth-century representations of “la belle sauvage,” these designers have used animal skins, crudely sewn together and molded to the body like a second skin, to construct images of twenty-first-century Amazons invested with a potent feminism.

Since prehistoric times, fur has been used not only for warmth and protection, but also for display and adornment. Fur’s decorative possibilities were realized fully in the Middle Ages with the emergence of a symbolic system for determining social rank and class affiliation based on fur’s material value. In the Renaissance, the necks, cuffs, and hems of gowns trimmed with ermine, lettice, or miniver (all members of the weasel family) became hallmarks of fashionable aristocrats. Today, fur continues to announce wealth, luxury, and exclusivity. The exhibition features the work of Dior, Fendi, and Gucci to illuminate contemporary representations of the fur-clad “bourgeois woman.” Fake furs are also featured as a means of manufacturing class access and as a means of constructing definitions of the “ethical woman.” Recent debates over fur and social morality are analyzed through the advertising campaigns of People for the Ethical Treatment of Animals (PETA) and LYNX of the United Kingdom. In the visual history of fashions for men, artists such as Holbein, Raphael, Rubens, and Titian are conspicuous for their highly refined and naturalistic representations of the different varieties of furs included in the costume of the nobility in the Renaissance. These painters not only manifest fur’s aesthetic values but also its economic values by equating fur with the wealth and power of the aristocracy. In the early twentieth century, the fur coat became the hallmark of the “mogul” or “capitalist,” a stereotype of the fur-clad man that has endured to this day. Charlie Chaplin immortalized him in two of his most popular and comedic films, The Gold Rush (1925) and Modern Times (1936). As in Chaplin’s films, this “fat cat” was often accessorized with a hat, cigar, and moustache, signifiers of wealth and status that are only surpassed by the motorcar. Today, the fur coat is not only a symbol of wealth and status, but of virility, machismo, and male dominance. The exhibition explores how the dandified self-presentations of sportsmen and hip-hop performers reference pimp style, with its blatant display of sexual and economic power.

The power of plumage to signify both vigor and ardor has a long history in fashion. While plump ostrich feathers dangling from wide-brimmed beaver hats announced the physical and sexual confidence of the seventeenth-century cavalier, delicate egret feathers woven into the coiffure of an eighteenth-century courtesan proclaimed her sensual exoticism. In the exhibition, these historical references are articulated through the wondrous “Birds of Paradise” creations by renowned milliners Philip Treacy and Stephen Jones. The fantastical feathered costumes of Las Vegas showgirls—iconic symbols of femininity born out of male fantasies of the “kept” or “caged” woman—are also shown alongside equally dazzling and sexualized creations by Jean Paul Gaultier and Rudi Gernreich. Among the highlights of the exhibition are examples of feathers used for display and attraction in male apparel, such as Jimi Hendrix’s peacock feather waistcoat, a psychedelic manifestation of the Restoration fop.

Image courtesy of the Metropolitan Museum of Art