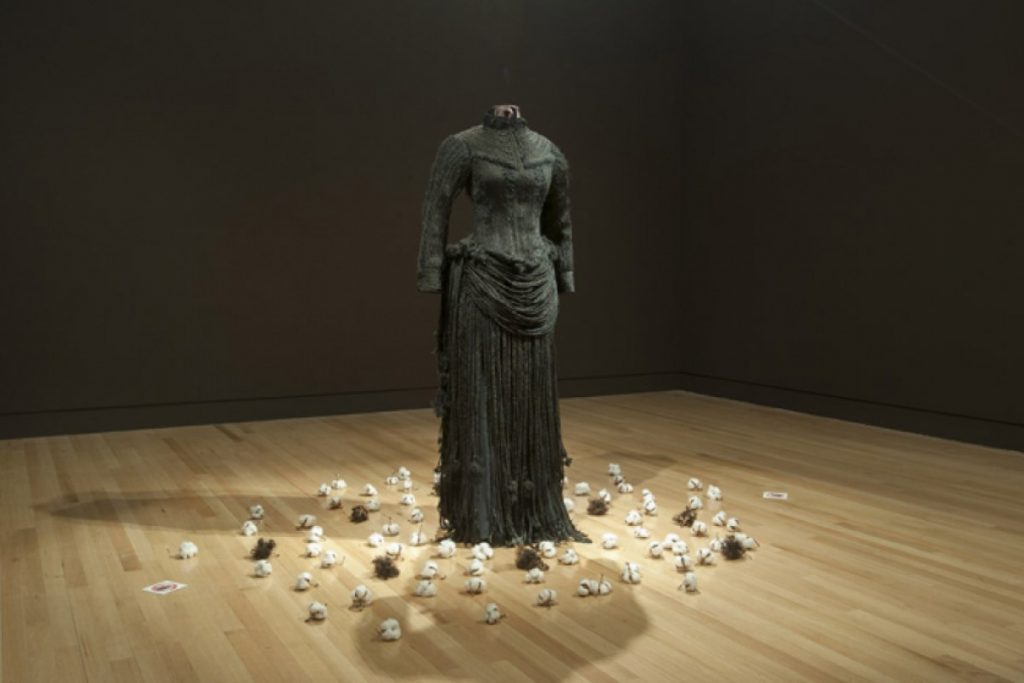 Worn: Shaping Black Feminine Identity by Vancouver based craft artist Karin Jones is the first contemporary art installation presented as part of the Of Africa project. This site-specific installation was selected through a public call for artists, who were invited to reflect on the position and representations of African Canadians in the nation’s historical and contemporary narratives, in dialogue with the historical holdings of the ROM’s Sigmund Samuel Gallery of Canada. Jones’ beautifuly crafted piece, a Victorian mourning dress made of synthetic hair, evokes the complexity of African identity when shaped by forces such as imperial rule, slavery and alienation.

Of Africa, is a three-year, multiplatform project, that gives sustained presence to African and diasporic themes, histories, and artists within ROM programming. Of Africa rethinks monolithic representations of Africa and its diaspora. Offering multiple perspectives, it introduces audiences to African and diasporic cultural and artistic expressions ‒ both historical and contemporary. Conscious of the past, Of Africa engages the present to open up dialogues that may shape the future.

STATEMENT FROM THE ARTIST

For me the Victorian Mourning dress is a symbol of sadness, “high” culture, the British Empire, and the imposition of feminine beauty norms.

I have made one out of African”hair”–actually a synthetic material created specifically for use in Africa-style braiding techniques. The work underlines African hairstyles as a craft as refined as any decorative art produced in Europe. It alludes to the invisible labour of the thousands of Africans who contributed to the wealth of the British Empire. It also references the story of Sarah Baartman, an African woman whose silhouette helped shape 19th-century European fashion.

The dress rises from of bed of cotton bolls and African hair bolls, a mythic figure born of the cross-cultural forces of colonialism, commerce, and slavery.

I wear my African-Canadian identity much as a Victorian woman would have worn this type of dress: proudly, but uncomfortably, shaped and also constrained by it.