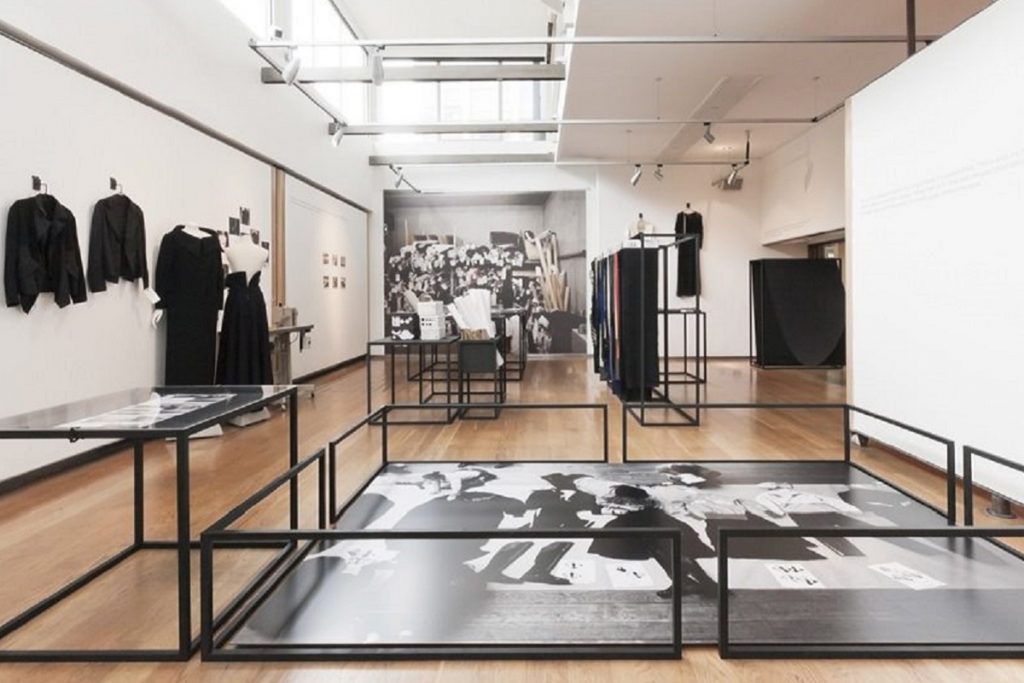 Yohji Yamamoto At Work told the life cycle of a single garment, a dark navy sleeveless pleated dress from his autumn/winter 2010–11 season, in reverse sequence from the finished article set in the front entrance of the College on John Prince’s Street through to the raw fabric in which Yamamoto’s design lay latent.

The exhibition presented an opportunity to explore ideas of process, inspiration and journey in the work of Yohji Yamamoto, and was designed to be an immersive and multi-layered experience of creation rather than a literal guide to making a garment. The three suggested sections – presentation, construction and inspiration – included original toiles, patterns and vintage pieces, as well as photographic studies made backstage at Yohji shows and documentary images of his working studio in Japan.

Yohji Yamamoto is one of the world’s most innovative and influential fashion designers. He launched his first ready-to-wear label ‘Ys’ in Japan in 1972, and arrived in Paris in 1981 with his first ‘Yohji Yamamoto’ collection.

Yamamoto became internationally renowned in the early ’80s for challenging traditional notions of fashion by designing garments that seemed oversized and unfinished, and playing with ideas of gender and fabrics not normally used in fashionable attire, such as felt or neoprene.

Other works revealed Yamamoto’s unusual pattern cutting, knowledge of fashion history and sense of humour. This spirit of experimentation remains to this day and contributes to his unique contribution to fashion history. He was awarded an honorary doctorate by the University of the Arts, London, in 2009.

Yohji Yamamoto At Work was curated for Fashion Space Gallery by Ligaya Salazar and Magdalene Keaney, and designed by Carmody Groake.