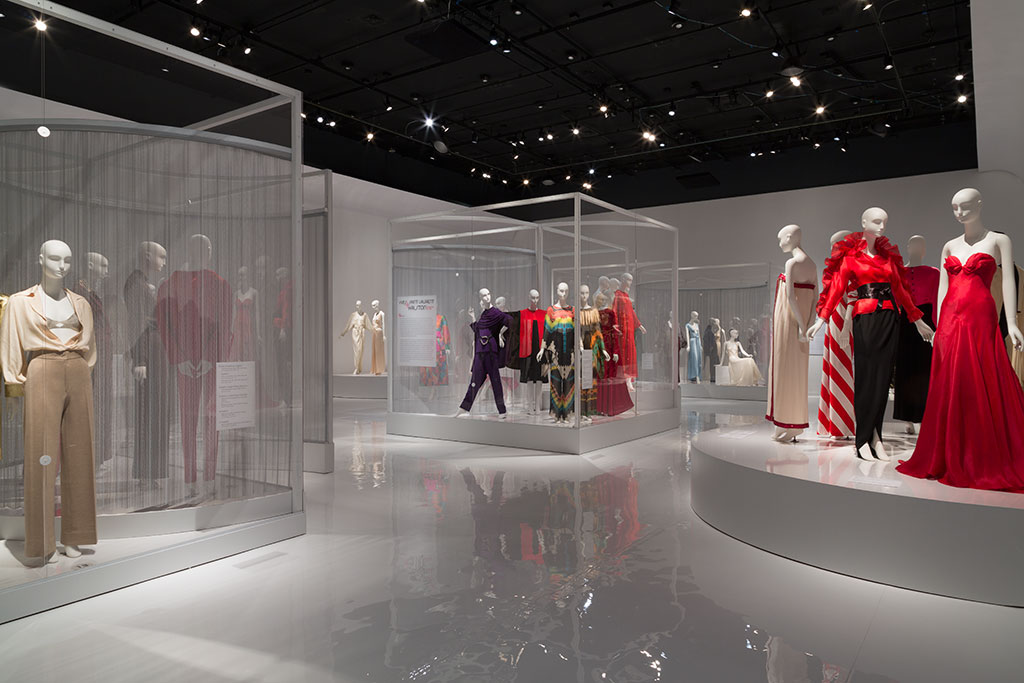 Yves Saint Laurent and Halston were the most famous and influential fashion designers of the 1970s. Drawing inspiration from menswear, foreign cultures, and historical periods, Saint Laurent and Halston crafted a new, chic, and modern way of dressing that became synonymous with the sexy and glamorous lifestyle of the decade. While they and their designs are recognizable to fashion enthusiasts and monographic books and exhibitions on each designer abound, Yves Saint Laurent + Halston: Fashioning the 70s was the first exhibition to juxtapose and analyze their contributions to fashion at the height of their careers, as well as how they came to exemplify this singular, dynamic era in fashion history.

The 1970s was a time of momentous change in fashion, not only in the look of clothes but also in the way they were designed, made, distributed, and consumed. This dichotomous decade—sandwiched between the counterculture 1960s and the opulent 1980s—witnessed the demise of haute couture’s majestic reign and the simultaneous ascension of designer-led conglomerates. The shifting sands of style during the 1970s accelerated the relaxation of fashion codes. Eclectic individuality blended with a somber modernity that mirrored the dour economic mood of the decades early years. Perhaps because the 1970s was a period of such transition and uncertainty, its fashions are among the most challenging in modern fashion history to assess.

The entry room of the exhibition traces Saint Laurent’s and Halston’s careers in a dynamic illustrated timeline. Though very different in their output, the two shared many career parallels, particularly their rises and falls, from the onset of their careers in the 1950s to their respective struggles in the 1980s, which were eerily in sync.

The first section in the exhibition demonstrates how Saint Laurent and Halston drew on menswear when creating clothing for women. After the debut of his Le Smoking woman’s tuxedo in 1966, Saint Laurent’s experimentation with menswear reached a zenith in the 1970s. He played on different archetypes including the pinstripe gangster suit, safari jacket, and utilitarian jumpsuit throughout the decade to create looks that have become synonymous with a Saint Laurent style. Likewise, menswear informed many of Halston’s best-known designs, including his most famous garment, the Ultrasuede shirtwaist dress. These classic pieces included cashmere turtlenecks, matching cardigans, Ultrasuede jackets, and trim trousers, which reflected Halston’s own subtly unisex style.

The second section explores each designers use of exoticism during this period. Yves Saint Laurent’s Russian- and Chinese-inspired collections of the late 1970s, both of which are represented in the exhibition, were some of his most ornate and theatrical creations. The sumptuous looks that comprised these collections were an exercise in fashion fantasy that demonstrated Saint Laurent’s interest in the decorative power of the exotic. Halston, on the other hand, sought more subtle and substantive ways to incorporate non-Western costume that would push the boundaries of his construction. This resulted in garments such as his famous sarong dress made from a single piece of fabric spiraled around the body. Despite these opposing approaches, the two often arrived at similar incarnations of the exotic in the form of caftans and vibrantly colored pajama sets.

Drawn exclusively from the holdings of The Museum at FIT, the exhibition offered a unique perspective on two of the best-known fashion designers in modern history. The museums collections hold the Halston Archives—the most comprehensive records of his work in the world—as well as a vast array of significant Yves Saint Laurent pieces donated by important clients, fashion editors, friends, and colleagues of Saint Laurent. These include Lauren Bacall, Marina Schiano, Aime de Heeren, Mary Russell, and Tina Chow. It is worth noting that the first major retrospective exhibition on Halston was organized at the museum in 1991 by the late curator Richard Martin.

No two designers defined and dominated the decade more than Yves Saint Laurent and Halston. They were the eras most influential and celebrated clothing creators, becoming celebrities in their own right. Both have been the subject of countless books, articles, films, and exhibitions. Yet for all the justifiable attention and study they have received, the fashions created by Saint Laurent and Halston have not before been directly compared in an in-depth, significant way.

Yves Saint Laurent + Halston investigates how Yves Saint Laurent and Halston arrived at their now iconic styles by engaging with similar themes of menswear, exoticism, and historicism during the 1970s. While today they are considered diametrically opposed—Saint Laurent is viewed as the great colorist who imbued his clothes with a sense of drama and fantasy, while Halston is seen as the eras master of modernism and minimalism—the aesthetic similarities between their designs during the 1970s, particularly at the start of the decade, are undeniable. As their styles matured, Saint Laurent and Halston gradually diverged so that by the end of the decade, their respective output contained looks that were distinct to each designer.

The final section of the exhibition displays how Saint Laurent and Halston engaged with past periods of fashion history. Historical pastiche was a significant part of Saint Laurent’s design strategy throughout his career. During the 1970s, he drew on the trend for vintage dressing that was emerging on the streets of Paris to create politically charged homages to 1940s fashions. He also pulled heavily from the fashions of the Belle Époque in some of his most voluminous and feminine creations, complete with petticoats and gigot sleeves. Halston took a different path, arrogating a limited number of historical elements from a relatively narrow period in time, specifically the 1930s and 1940s. A key source of inspiration for Halston came from the work of Madeleine Vionnet and the cadre of women couturiers who dominated high fashion design during the interwar years. Among Halston’s hallmark 1970s designs were his reinterpretations of streamlined and sinuous bias-cut gowns and separates.

Yves Saint Laurent + Halston: Fashioning the 70s was organized by Patricia Mears, deputy director of MFIT, and Emma McClendon, assistant curator of MFIT, with Fred Dennis, senior curator of MFIT. The exhibition is accompanied by a book, with essays by Mears, McClendon, and Dennis, and published by Yale University Press.

This exhibition has been made possible thanks to the generosity of the Couture Council and the New York State Council on the Arts.

Image courtesy of the Museum at FIT.