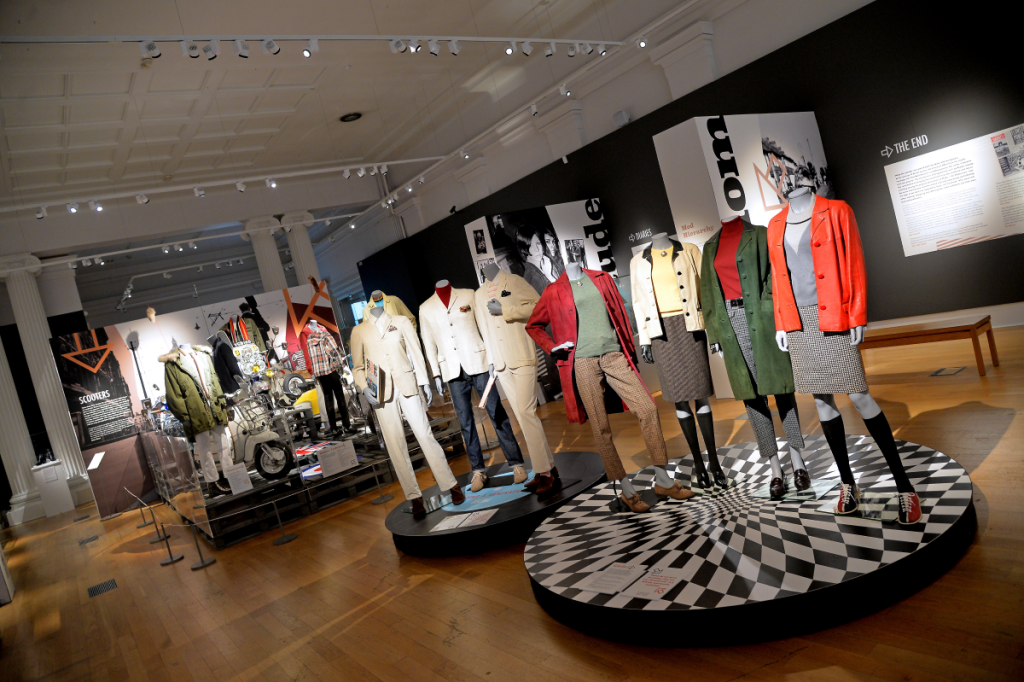 A major exhibition was held at Leicester Museum and Art Gallery (April 12th – June 30th 2019) which included ephemera, costumes and art from the Mod scene. The exhibition was curated and designed by Joe Nixon, co-founder of Arch Creative and social history author Shaun Knapp based around his latest book, Mods: Two City Connection. The exhibition included includes eyewitness accounts and photographs from Leicester and Nottingham Mods, which had never been seen or heard before.

Leicester based charity Soft Touch Arts were a major project partner, initially winning the funding from the National Lottery and BID Leicester to make the project happen, and then supporting with design and curation. Headed up by directors Christina Wigmore and Sally Norman, Soft Touch Arts involved over 90 young people from disadvantaged backgrounds, giving them the opportunity to meet the older generation and participate in creating an ‘inspired by’ Mod culture exhibition.

The costumes – as well as original 1960s clothing – were provided by designer Roger K Burton. One of the most established and well-known costume designers in the UK, Roger K Burton has worked in music videos, television, films and commercials since the late 1970s: he has dressed hundreds of influential artists and bands, from David Bowie to The Rolling Stones. With over 50 years’ experience of collecting vintage street fashion, Roger, an author and former Leicester Mod, started out supplying original clothing to cult films such as Quadrophenia and Absolute Beginners, and now hires original street fashion to TV and film.

The exhibition also featured input from Alan Fletcher, the author who wrote Quadrophenia (the novel) and was a story consultant on Quadrophenia (the film). Alan also wrote The Mod Crop Trilogy, a trio of books based on his life as a Mod in Nottinghamshire during the 1960s.

The exhibition received a record breaking attendance of over 35,000 visitors and won a tourism award for contributing 1.75M to the local economy.